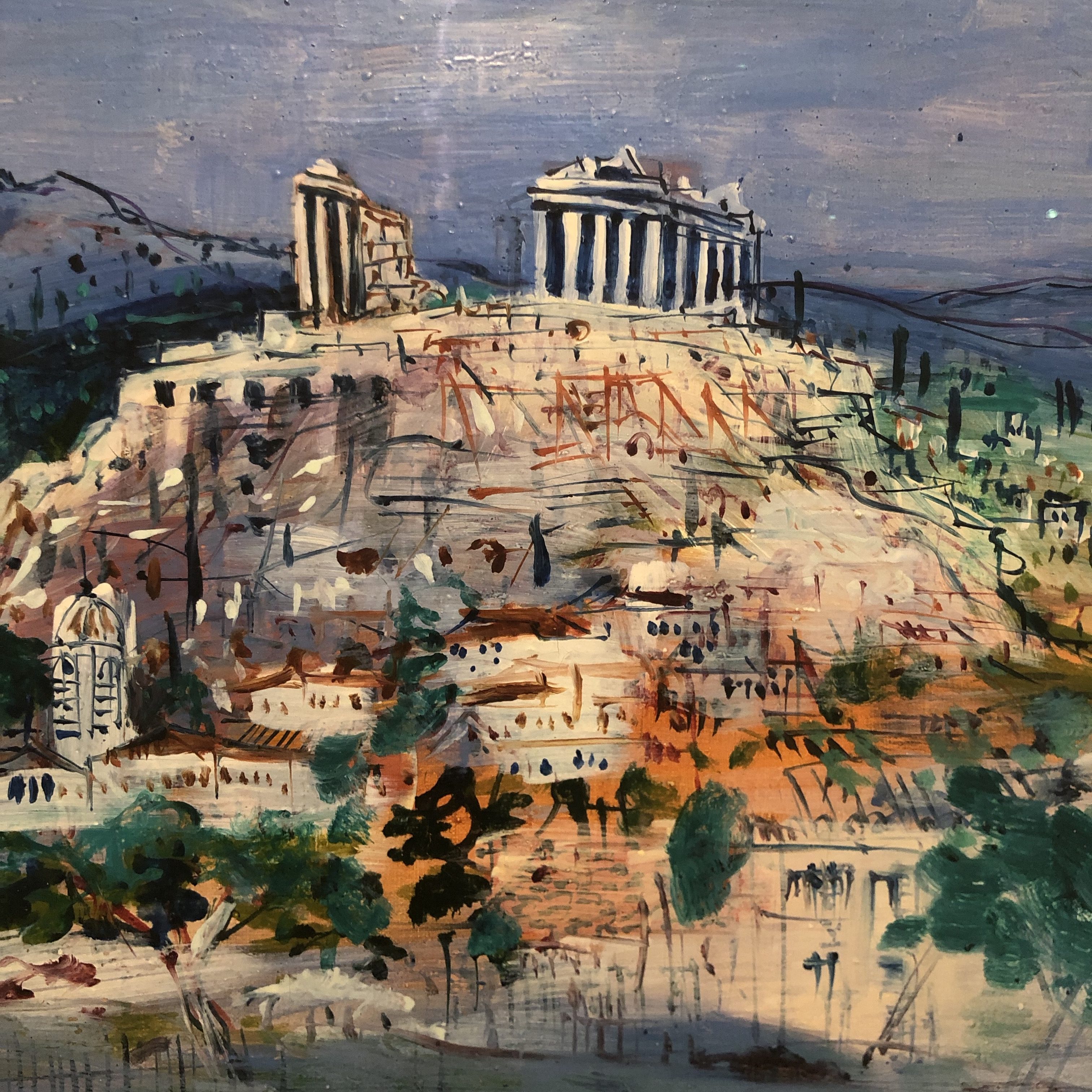 In Spain we use to say we do not want to see someone even in a picture [ni en pintura] when we kind of hate them. It is not my case with Athens, but there are periods I do not see the Acropolis ‘ni en pintura’ although this time, I was able to find a nice painting in the Leventis Gallery in Nicosia last week… Jokes apart, since the last post when I was right back from Morocco, I have been in five countries and a half (North Cyprus is not recognised beyond Turkey) and thirteen cities plus the other half of Nicosia. For many, all this travelling is a dream, but when working is not really that much even enjoying some VIP lounges in the way.

Right before coming back to Athens I has the opportunity to attend a very special event. One of my supervisors, Prof. Víctor Fernández, retired last year and the Association of Archaeologists in Asturias organized a cozy and emotive event to homage him. He has been a key figure in my growth as an archaeologist and as a person, and having the opportunity to go was at least a small sign of my gratitude. He became soon more than a supervisor, a friend and a model. And this is why I would like to share these words now. THANK YOU.

But soon was time to get back in track with work… and I have been quite behind in the last weeks. One of the reasons has been all this travelling. It is necessary as I need to keep collecting data in the form of visits and interviews, but I should have completed some basic tasks before leaving to Istanbul almost a month ago, and now they are still there and I need to rush more than expected. Also, some other meetings are delayed without notice and this makes me a bit nervous.

Anyway, ever since I moved to Athens I hoped Istanbul to be this place I can just fly to any day… but this day never came, so checking for curiosity I found a cheap flight to that same week and took it rushing to arrange some meetings. Against all odds the outcome was very good, with many responses, most positive, than made of this trip a fruitful one that helped shaped the picture in Turkey. Still, I will need some more interviews to complete it. Right after, I had been invited to a workshop in Portugal and as the flight was for a bit longer than the event itself I took the time to complete the country with several more interviews and visits while I had the opportunity to present for the first time #pubarchMED as a whole. Right after, I wanted to run Limassol half marathon, so took some extra days to open Cyprus and do some preliminary visits and interviews there. I beat my time goal in the race, and managed to actually interview more people than originally expected, so the outcome was also great.

After three weeks away, with barely a day to do laundry in between trips, I got really tired, which affects productivity. Luckily, I will have the opportunity to rest working from home for a few days before the next big advances in the project, which are coming very soon…

Meanwhile, just to finish with a note on visual poetry and my new ‘hobby’ during research, I would like to share a short story illustrated with one of the images I took in Cyprus [not the only case]. Have you realised that in many archaeological sites there are lots of supports without a panel? Well, I have… is a trend all around the world and reminded me a story from when I was local archaeologist in my village. I found an old project to cover the archaeological site and both in the written part and the budget, only the supports for the interpretative panels was considered. Is that the issue in all these sites? What is your experience as managers with this? I would like to hear from you… as we usually complaint about the contents but there are deeper issues.